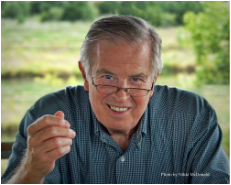 The photography of Tim White has won many awards. He has presented many work shops and multimedia
programs through out the Northeast, in Nebraska, and in Canada.

His special interest has been Nature Photography.
For over 12 years through the Poconos, Environmental Education Central Pennsylvania, he led three day photography workshops and eight day Photo Safaris to Maine. He has also given multi-media programs in National Parks, the New England Camera Club Conference at Amherst, Massachusetts, and the New Jersey Confederation of Camera Clubs Convention.

He has wide experience in nature, wedding, portrait, and sports photography. His photography has been published in many venues, and he has had commercial print exhibits in Maine. His program “The Puffins of Machias Seal Island” raised thousands of dollars for the National Audubon Society’s program to restore puffin colonies off the coast of Maine.

His love of wildlife photography has taken him all across the U.S.A., Canada, and to England, Scotland, and Wales. He is currently selling nature prints at the Rowe Sanctuary and The Crane Trust in central Nebraska. He has also been invited to judge approximately 150 photography contests, locally including the Douglas County Fair. He has also been represented by Shostal Associates and Superstock Agencies.