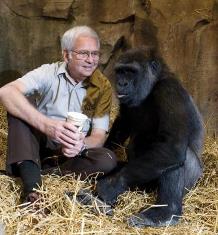 Simmons, who led the Henry Doorly Zoo to become one of the top zoos in the country, did back off from his 60 to 70-hour work weeks to what he calls “banker’s hours.” The more relaxed schedule is a reluctant concession to his openheart surgery in 2008. He also continues conducting tours for the zoo’s “Zoofari.” Trips are auctioned at the zoo’s biannual fundraiser. In 2012, he took a group to
Tanzania and a group to Botswana in 2014. Africa is a favorite destination for the adventurous Simmons.

His active involvement with five professional organizations, including as past president of the American Association of Zoo Veterinarians, also keeps him on the road. Recent trips have been to Prague and Cologne, Germany. Simmons figures he has visited 49 countries plus the Antarctic during his long career.

In 2013, he was selected as the international recipient of the Conservation Breeding Specialist Group’s Ulysses S. Seal Award. The honor is given to “people who exemplify innovation in applying science to conservation.” The group noted areas of invention and research where he excelled and his role in conservation projects worldwide.